Hannah Kreitzer’s art tells stories that have been woven into the fabrics of the Earth, but often get forgotten as we move our attention from the cell phone to the laptop. Her sketches celebrate the bare bones of humanity–something deep and instinctual. She reminds us that at some point, we were not so separate from the wiles of nature, that our roots–in art and words and movement–wind through time and space. Her hands communicate lost passages of sacrifice, scavenging, and communion.

Tattoos of constellations cover Hannah’s body. She is the sky dreaming it was an an artist or an artist wishing to be as vast as the sky. Considering her mediums range from embroidery and wood-burning, to song writing and painting, her vastness goes unquestioned. If you need an ankylosaurus embroidered on a tie or a set of honey badger nesting dolls, she doesn’t question. She knows you dream of being more than a human, too.

VC: Thomas Jefferson, though a former president and writer of the Constitution, always considered himself a gardener, by trade. I know that you are an artist of many mediums, but what would you choose as your occupation?

HANNAH: Hmmm, one-word answers are tricky. I always thought I’d make a good nun, though I could never get behind any particular doctrine. Sometimes I try to put myself in the mind frame of a holy wanderer with no particular affiliation- a nun of none. Everything we do has the potential to be prayerful practice, just by the intention we hold and the ways we pay attention.

VC: Which of your mediums was the first that you learned?

HANNAH: Probably drawing. I used to spend hours at the drawing table as a little kid, trying to get the damn angle of a horse’s hock joint.

VC: You often make gifts for your friends, as well as art that just plain comes from the ether, but what has been your favorite project?

HANNAH: Once I was embroidering a necktie in a bar and the bartender asked me to stitch him a tie of a devil riding a unicorn with Paul LePage’s head on a trident. On the off chance someone hasn’t heard of our horrible governor and his flair for blatant ignorance, just google Paul LePage quotes to see why taking even small, thread-based action against his regime was deeply gratifying. I made the devil into a she-devil in reference to the time he said that the worst effect of BPA in can linings was that some women might grow little beards. I daresay it was the first time anyone’s stitched a hint of pubic hair on a one-inch devil woman.

VC: From where do you draw inspiration?

VC: You were once diagnosed with an eating disorder. What part did your art play in your recovery, if any? Do you find that this particular personal struggle inspire(d/s) your artwork after the fact/now?

HANNAH: The interesting and daunting thing about eating disorders is their complexity. I’m not sure why that struggle has plagued me for so long, but I still fight through it every day and I’m less interested in its origins than in how I live in spite of it. You can certainly see themes that parallel the stereotypical ED imagery in my art…bones, scarcity, yearning. But you can also see a deep commitment to what I call the wider patterns- the layers of natural history, ecology and culture that bind us into some kind of sensible order on Earth.

My central conflict seems to be the struggle between that deep sense of belonging and the choices I make toward deprivation. Often I think the only way I made it through some of the hospitals was by learning of Taoism. That notion of intentional surrender to greater harmony seems the honorable way to conduct yourself, if you can see patterns that already order the world. Ever since I was a kid I’ve felt this deep well of grief in my center; each small action in accordance with bigger webs helps me tread water. 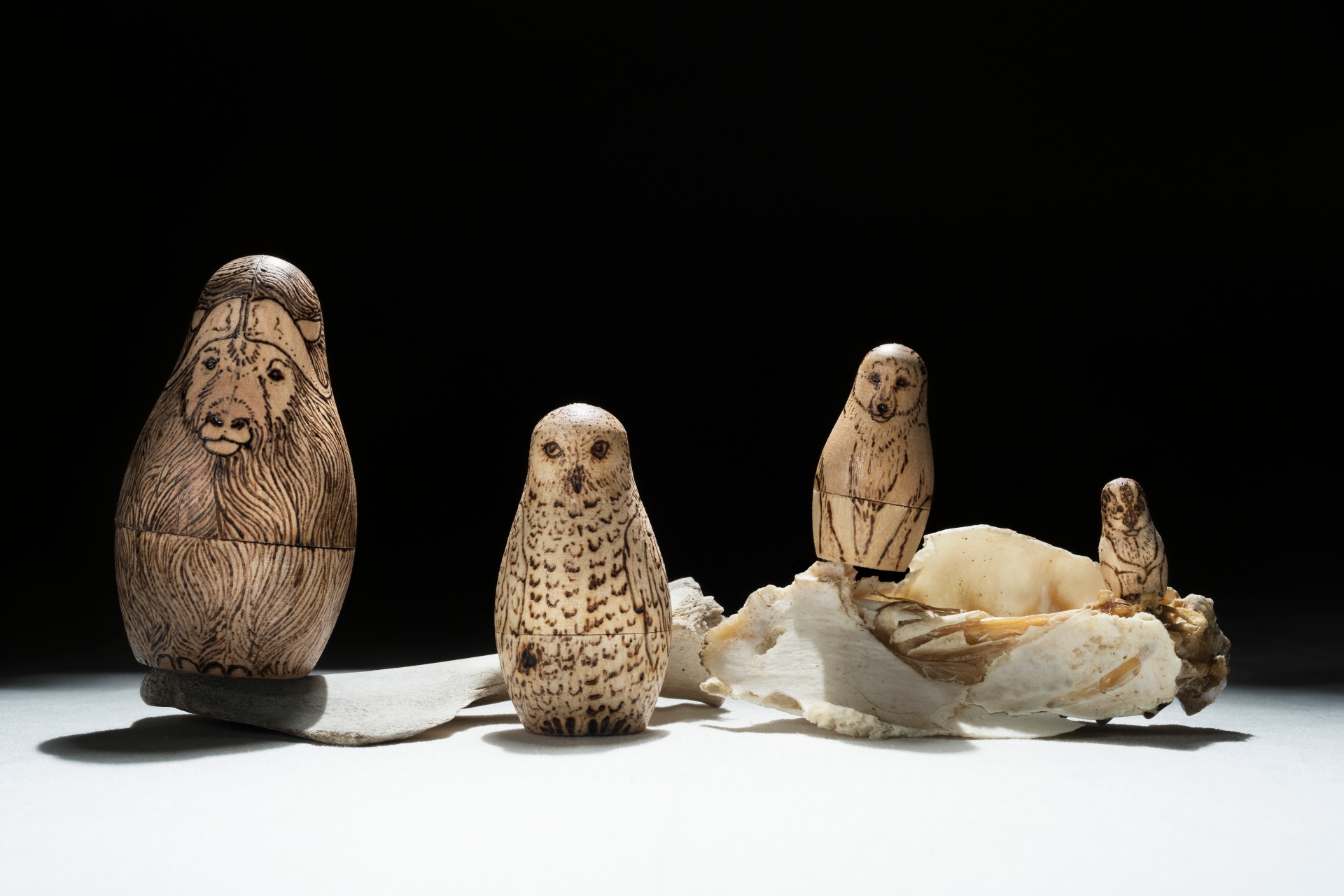 VC: I know that you do some art work for your local community (cheese boards and the like). What do you think the importance of artists interacting with their communities is?

HANNAH: I think it depends on the kind of artist you are, but for me the connection to other people is a kind of communication. I’m fairly introverted and can get burned out on social graces, but I care deeply about the people in my life. There are days when I can’t muster the energy to meet my friends for dinner but I can always wood-burn them a tardigrade on a spoon, and that does something to reinforce the knots of our relationship. That sort of thing resonates outward, I’ve found- the more people who know what you can make, the more will ask when they need something they can’t find somewhere else. That kind of give and take nourishes me- sometimes on multiple levels, as I encourage barter for commissions. Last week, for instance, someone asked me to draw a portrait of their friend’s dog to serve as a cake topper at his birthday and traded me a (dead, processed) chicken and a dozen eggs.

We don’t need art to survive in a technical sense but it gives us something wonderfully inexplicable- anchor points of resonance in our symbols, stories, observations- to ground each other.

VC: What books, music, or other art pieces shaped who you are now?

HANNAH: Oh man, that’s a big one. For the sake of time and space, I’ll try some lists. Books: My first big literary love was the Redwall series, and I spent hours poring over Jan Brett picture books. Calvin and Hobbes and the Dinotopia books are all I ever need to regain a sense of grace and gratitude for the world. More recently, I’ve come to love the poetry of Octavio Paz and Rumi, the fiction of Sherman Alexie, Salman Rushdie, Diana Abu-Jaber, Barbara Kingsolver, and Tamar Adler’s An Everlasting Meal: Cooking with Economy and Grace. To name just a very few.

Music: I always say my dad raised me on John Prine and The Band. The poetry of the former and the ragged abandon of the latter are really precious to me in that they went from being my dad’s music to mine somewhere in the span of growing up. I’ve found a deep love of North African desert blues-rock…Tinariwen is the classic I always return to. Oh hell, there’s so many- Jason Molina, Joe Pug, Okkervil River, Blitzen Trapper, A.A. Bondy, Johnny Clegg, Oliver Mtukudzi, Cat Stevens, The Felice Brothers, Dessa, Paul Simon, Shakey Graves, The Tallest Man on Earth, K’naan, Bombino, Dr. John, Mark Knopfler.

My newest fixations have been the Ethiopique playlists on youtube and my dazzling friend The Hollow Horse. TV/Movies: A Fish Called Wanda, The Sopranos, The West Wing, The Black Stallion, Sin City, The Fifth Element, The Man From Snowy River, Boston Legal.

VC: Hallowbone, the organized entity, is rather new. But where do you see it going in the upcoming years?

HANNAH: I hope to make Hallowbone at least part of how I sustain myself, be it by egg-and-chicken barter or more broadly accessible cash-money sales. I don’t want it to be my sole identity- I really value having pragmatic, often repetitive-manual-labor type jobs to balance my far-flung brain. Somewhere between ether and earth is the road I’m trying to tread.

VC: Where do you find the most solace?

HANNAH: In the physical-world sense, I feel most truly at home on my neighbor’s farm. In other contexts: a cup of tea, the smell of woodsmoke, homemade bread, beeswax, or horses. Being amidst a herd of goats chewing their cud will make everything right with the universe in just 5 minutes. Try it.

HANNAH: I look at pictures of outer space, or go off in the woods, or ask true friends to kidnap me for dinner. All of these help me get over myself, which is one of my two life goals. (The other being to learn to carry a basket on my head). 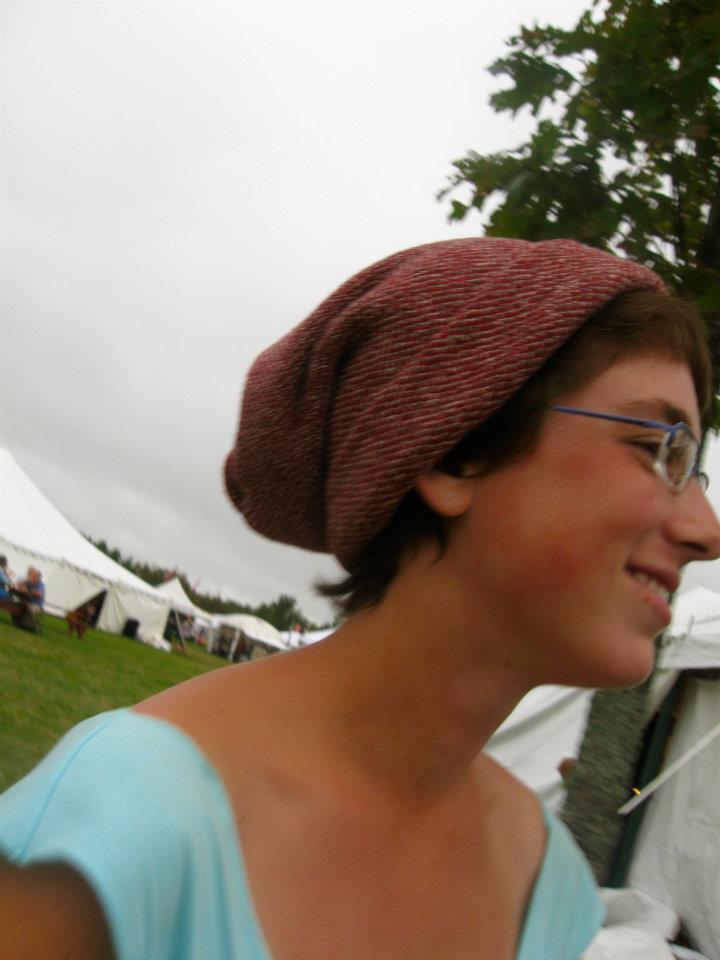 VC: If you were an animal, which would it be and why?

HANNAH: Ha, definitely spotted hyena. They are my very favorite land mammal and an endless source of zealous fascination. Anyone who has ventured to ask why there are hyenas on my name tag at work or what the skeleton tattooed on my left arm is have been subjected to a babbling rant about physiologically-reinforced matriarchal clan structures and ultimate hunting/scavenging efficiency and all kinds of crocuta trivia.

Seriously, look them up.

VC: Where do you want your next adventure to take you?

HANNAH: Ethiopia, Tikal, Iceland. There’s pretty much nowhere on Earth I don’t want to go but those have been calling loudest lately.

VC: You live relatively in the middle of nowhere, Maine. While many artists choose to go to the hearts of bustling cities, what is it about Maine that keeps you there?

HANNAH: Well, from a pragmatic aspect, I don’t drive, so it either takes a lot of creativity or a long time to get anywhere I want to go. Also, there are good people but not too many, and lots of farmland, and the Common Ground Country Fair. 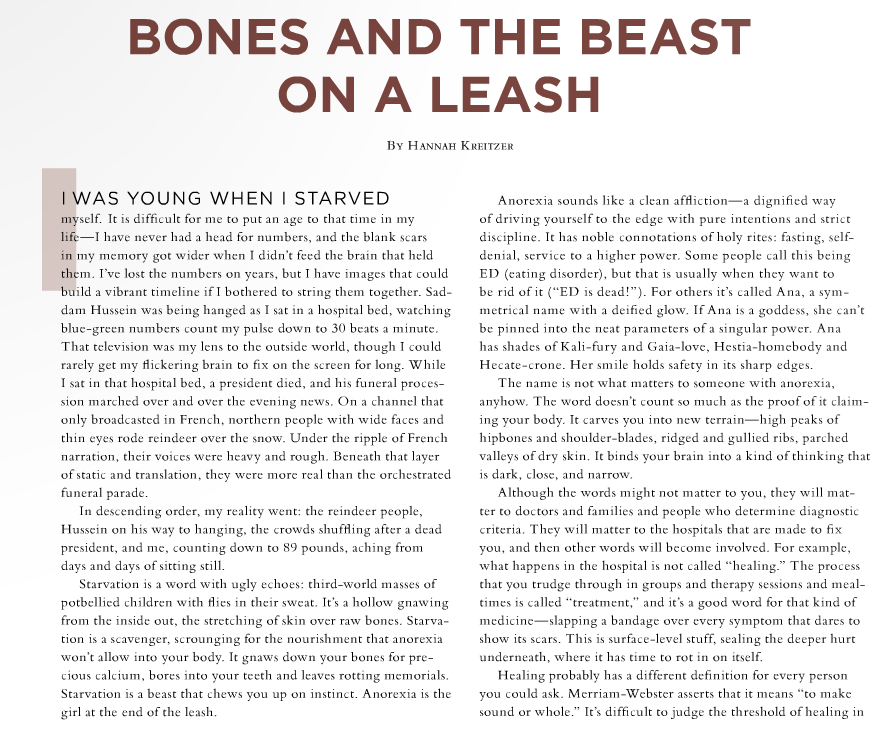 VC: How does the place inspire your work?

HANNAH: I love the pragmatism it takes to live here. To make it work, you have to work. You have to bow to the elements and bend or else you’ll break. But even breaking helps sometimes- it’s the first step toward healing. You can do a lot of healing here if you let yourself get hammered open and then start the steady work of mending.