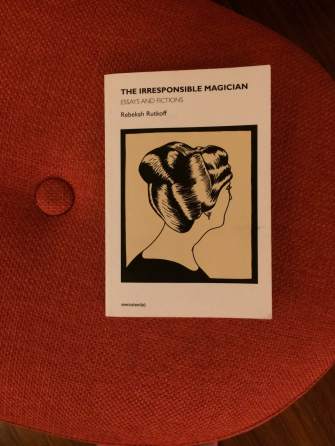 It’s tricky to pin down what, exactly, The Irresponsible Magician is, but that’s the fun of it – it defies genre. A work that weaves between essay and fiction, Rebekah Rutkoff’s collection from Semiotext(e) is exploratory and pushes beyond what we have often come to expect from our books – that extra readability that comes from knowing what exactly you’ve picked up, from whichever categorized and labelled aisle it came from in the bookstore. With Rutkoff, you’re bound to work a little harder, as she swerves between fact and fiction through critical essays, stories, imaginary interviews and more.

In the spirit of this book and its abrupt turns to pop culture references, I can’t help but mention a scene from the sitcom Friends, in which Ross tries to figure out why Phoebe is suddenly, inexplicably, mad at him. Phoebe can’t remember, but knows that she’s angry with him over something, so she continues to act negatively towards him. The two eventually discover that she’d in fact only been mad at Ross for a dream she’d had about him – that none of it was real, but to her, it was enough that it stuck and affected her interactions with her friend for the next couple days.

While this is an extreme example of how dreams can sometimes bleed into our memories, or even be mistaken altogether for something that actually happened to us in the past, it no doubt brings to mind what Rutkoff is doing here with her writings. She seamlessly blends characters into the narrative that you know are not really there, as we know them – that are her own quirky interpretations of their personalities, presented as completely real. There’s a great deal of humour in this, as she suddenly lists off run-ins with celebrities like Ed Harris, Alicia Silverstone and Rob Lowe, so matter-of-factly you can’t help but smile.

“Rob Lowe was campaigning for Dukakis in my hometown. I was in high school and wore a purple and metallic scarf in my hair. Later he came by the local pizza place and when I met him, I grabbed onto his hand and held on until he said, ‘please let go.'”

This playfulness is later employed through a mock interview with Oprah Winfrey, who talks about everything from her weight loss to her ‘favourite things’ to her relationship with Stedman (things that, over and over, were of interest to the tabloids wherever Oprah was concerned). But it’s talk of her career – maintaining an air of vulnerability for her audience – that strikes Rutkoff. Here is a woman with all the power and resources in the world, never married, dedicated solely to her ‘brand,’ wanting “each episode to be worth a year of therapy for my viewers.” So, for the benefit of the viewers and in the name of being relatable, she talks about forswearing her own therapy as long as her show is on the air, “to keep the wound moist and protect the brand.”

Women who lay their internal lives out in the open and who aren’t afraid to be vulnerable for whichever purpose – for their art or for their TV audience – make recurring appearances throughout Rutkoff’s collection, such as in her imaginary interview with the artist Carolee Schneeman. In it, the fictional version of Schneeman muses about heterosexual relationships and how, “Ideally at the end there’s grace and the phallus is as much yours as it is his.”

Through all this, Rutkoff intersperses her creative renderings of celebrities with her own beautiful photographs taken all over – from “Broken Danish chair, Brooklyn, NY” to “Children returning from an island, Paris, France.” For a work that refuses to be defined, jumping from genre to genre, fact to fiction, text to photographs – I am somehow able to boil it all down to one lovely meditation on a dream, which I think above anything else gives a sense of why this book is worth the read:

“I dreamt of a female artist, one with meagre talents, preparing to make Christmas gifts. Soon she would order small circular pieces of wood: charms. In her world there is an appreciation for any form of creative output, even if the result is not art.”

You can read more about Rebekah Rutkoff’s work at MIT Press.

LESLEY LEROUX is a writer, editor and artist from Canada’s capital (originally the little island of Newfoundland). She graduated with a degree in journalism from Carleton University. Her fiction, nonfiction and photography have been published both in print and online, and she has occasionally dabbled in radio and television. She is a feminist, bibliophile and yogi who can be found tweeting about any of the above @LesleyLeRoux.

Founded in 2013, we are a literary journal dedicated to publishing outsider literature. We publish art, prose, reviews, and interviews from marginalized creators.