“One day, I was not famous, the next day, I was almost famous and the temptation to go wide with that and reject my past was too great.” (8) This is the story Natasha Stagg tells in Surveys with astounding exactness and understanding of that esoteric corner of the internet of which we all, at once, show disdain for and vie to be a part of. The part that, if navigated correctly, promises fame.

Colleen is a twenty-three-year-old woman who witnessed the transition from pre-broadband internet to the sprawling, selfie-riddled place she eventually succeeds in monopolizing and more importantly, monetizing. In her reflection of the days before she finesses her way out of Tucson and into the center of the universe both on and off the internet, she says:

At one point the world was far more closed up, and then it was spread wide, in a way unlike anything that had ever happened before. You couldn’t love or hate what was happening, but it was hard, not matter who you were, to adapt and predict. (99)

Well, Collen manages to be one of the people who can adapt and predict. In fact, she adapts and predicts with the best of them and completely revamps her life in the process.

Prior to her internet-fame-turned-IRL-fame, Colleen leads a detached life of lethargy in Tucson, where she works at a mall survey center. She’s faced with the daily task of soliciting mall-goers for market research surveys. People who, as she puts it, “…don’t have enough money to shop for this stuff anyway, which is why they’re here” (14) Their responses are always useless so she spends the majority of her work day falsifying surveys to give the higher-ups the answers they’re looking for.

Colleen splits her time between her mind-numbing day job, dodging a persistent stalker who lives in her apartment complex, and toying with the idea of monetizing herself. The latter activity finds her selling her body; something that doesn’t bother her because she “…liked getting paid for sex, so maybe that’s a learned shame.” (59)

When Colleen puts the belongings of her Arizona self in storage and moves out to Los Angeles, she, finds herself “shedding everyone [she] was associated with.” (68)  She thrusts herself into a new world of being one half of an internet couple that achieves real life fame from online fame. Colleen and her boyfriend Jim spend their days cultivating carefully curated social media posts and their nights hosting parties, where even A-list internet-evading celebrities have come recognize them. They are a branding success story–even during the quiet demise of their relationship–that many other twenty-somethings aspires to. 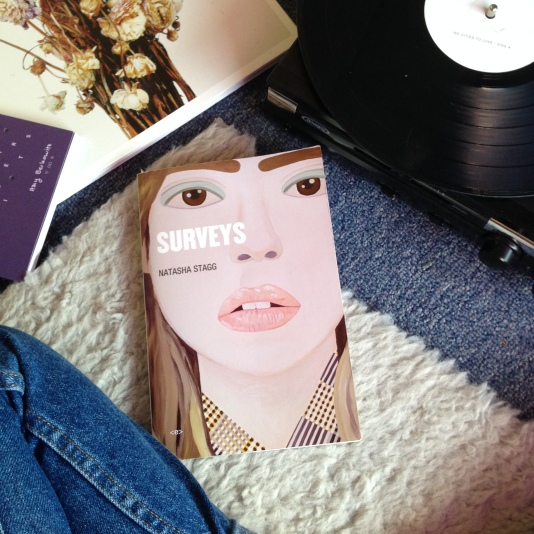 Yet, despite having won the internet, Colleen continues to obsess over Lucinda, another young woman doing internet things before a respectable  audience of loyal followers. Colleen can’t allow herself to escape her and often uses Lucinda’s presence to comment on the permanence of the web:

I looked back down at my phone, and pulled up searches and feeds, hit refresh. I can cut off anyone on these lists, simple, but they’ll always be there, sending out energy that I’ll always in some way be receiving. I may as well know exactly what it is. (142)

Colleen isn’t someone who can simply unplug. She re-birthed herself with the internet as her vessel, and just as quickly as she comes into her fame, she learns and becomes comfortable with the reality that the internet has turned into her lifesource. Unlike most who cower in shame at how they’ve succumbed to the world wide web, Colleen accepts her fate and doesn’t bother trying to fight it.

Stagg brings us into a growingly familiar world and uses Colleen to contemplate our collective daily strife in coming to terms with our internet dependency. In the latter half of the novel, we are presented with an inconsequential but ever-recurring dilemma:

My mother’s garden consisted of flowering shrubs, palms, and bromeliads…Even in a moment of distilled pleasure (stress minus stress equals pleasure, by definition), I thought about how I could distill it further, with a photo or text, and felt guilty for that. But why was sitting, enjoying nature, or something like it, better than creating some representation of it? I never thought that way about it in the past, when it was a disposable camera, or an easel and watercolors.” (161)

Stagg poses questions like the above throughout Surveys and draws us into Colleen’s internet-driven lifestyle all while keeping us on the outskirts of it. We are clued into a world we don’t ever actually get to see at any point in the novel and this preterition allows Stagg to act as both alienator and seductress, à la the internet.

Natasha Stagg lives in Brooklyn,  but on the internet, she can be found here. You can find her criticism, fiction, essays, celebrity profiles, and general updates here.

NEYAT YOHANNES is an Eritrean-American writer who’s from LA, but just moved to the Bay. By day, she doles out ice packs to kids who don’t need it as an elementary school office lady turned unofficial nurse. She spends the rest of her waking hours writing, attempting to be more formidable like Whitley Gilbert, and trying to keep Drake lyrics from constantly spilling out of her mouth. You can read some of her published work here. She tweets as@rhymeswithcat and occasionally blogs here.