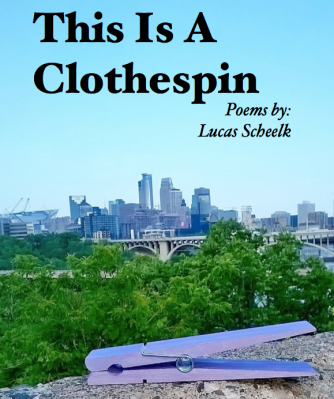 “This Is A Clothespin” is a work of art that provides an intersectional education in such a creative way, it is mindblowing to realize how much you are learning and enjoying it. Lucas Scheelk invokes the clothespin image to describe self-harm and the pinch of discomfort when the public is not a safe space, encouraging readers to think about how many clothespin pricks they would feel in any given day.

The poet handles race, sexuality, and mental health, sometimes all in the same line. One poem hits close to home on all fronts, in light of currently relentless news reports of police violence.

I didn’t focus on when the cop asked “Is that your real name?” But the options he gave to me stuck. “Ride home or hospital?”

I chose the ride, thinking the whole time, “Those wouldn’t have been my options if I wasn’t white.”

Self-identifying as trans and queer, Scheelk openly discusses privilege and passing. Things can always be better or worse than they are, and you can always portray yourself as more real or fake than you are. Scheelk stresses the importance of pride in being yourself, but also addresses pragmatic reasons why it may be okay to hide sometimes.

“I hate passing as neurotypical so much I feel like I’m failing myself but if I don’t disclose that I’m autistic at a job interview I have more of a chance of being hired,” Scheelk confesses. It is difficult to fit an inaccurate image that someone else has molded for you, always struggling to be more “normal” or “functional” than you are because other people think that you should be.

“They will see me as calm.  I will see it as surviving.”

Playing pretend takes a lot of energy. Scheelk writes, “They will see me as calm.  I will see it as surviving.” It is so easy to see yourself as a monster, whether this is a reflection of how others see you or not. It is so hard to get through the day in a world where no one even tries to make it easy for you. Scheelk hits this nail on the head with lonely outsider tones, but the writing also exudes a defiant hint, a belief that it is not worth trying to fit into this type of world. It will only be worth it in a better one. But how can the world be made better?

Scheelk clearly advocates for inclusive spaces, writing a six word story worth a thousand words: “RAISE AUTISM AWARENESS* *Unless you’re autistic.” When people are not permitted to advocate for themselves, they are consistently relying on other people to protect and fight for them, when those people are often misinformed or have no idea what it is like to live that kind of life.

I hate passing as neurotypical so much I feel like I’m failing myself but if I don’t disclose that I’m autistic at a job interview I have more of a chance of being hired.

It seems hypocritical for someone to raise awareness for something that they don’t understand, something that they probably often like to pretend doesn’t even exist. It seems like identifying as something does not mean that other people will consider you to have as much experience as they do, when they themselves have nothing.

The invisible becomes visible over time. Sometimes we wish we could travel back in time and give ourselves advice for how to handle transitions better. Sometimes being human is nothing but pain, constant clothespins closing around the tender skin of palms in public when everything is overwhelming. Sometimes we take these clothespins and hurt ourselves with them on purpose. Burns can become personal, touchy subjects, like children. Hiding can become a way of life.

“This Is A Clothespin” is a collection of puzzle pieces that come together to form a still-life glimpse into the real life of a multifaceted human. Take the time to read each page, as the poet took the time to put it all together. The complete, confident image that results is truly a grand reveal. Keep up with Lucas Scheelk on Twitter @TC221Bee, on Tumblr at http://lucasscheelk.tumblr.com, and on Instagram @lucasscheelk.

BETHANY MARY is a meditative tea snob studying gerontology in Minnesota. She was once the poetry editor of Green Blotter Literary Magazine and now reads submissions for Spark: A Creative Anthology and Zetetic: A Record of Unusual Inquiry. As an asexual advocate for a sexual assault center and blogger for Resources for Ace Survivors, she focuses on boundaries and mental health in her own writing. Some of her work is out in the world, and she rants on Twitter @bethanylmary.