Taylor Steele is a rare triple-Taurus. She’s a triple threat too—poet, screenwriter, and essayist—and it seems there’s very little that isn’t in her wheelhouse. You’ll find this is true almost instantly upon cracking Dirty. Mouth. Kiss. open. This is a collection of poems that roots for protection of the self, that’s wrought with newfound wisdom, and that needs to be read a few times over for its rich marrow to be completely sucked out. Also, it’s worth pointing out that its spellbinding illustrations deserve a gander or two of their own.

Taylor meditates on the concept of the individual becoming a part of nature as a form of self-defense. Or better yet, self-preservation. In “Spit Take,” our narrator says:

I keep my dirt behind my tonsils.

I am trying to grow a garden,

Or just a life in me that can survive

A mirror for a throat.

I open wide and scare every drunk in the bar.

The eyes that swallowed me before

Gouge themselves at the sight

Of all my cavities.

In an attempt to stay whole, the narrator manipulates the drunk in the bar’s idea of nature. She ignores the beautiful flower and takes the dirt beneath it to use as a talisman against the scum of the Earth. Dirt and decay are not scum, they keep her from it. After all, in “Anatomy,” Taylor does specify, “When I say “body,” I mean weapon.” And goes on to prove that the body as a weapon is a powerful thing. 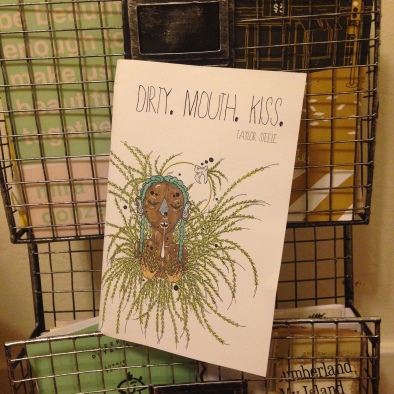 This collection doesn’t shy away from the macabre elements of love. In “I Swallowed The Skeleton Key,” death is on the menu. Loaded with an arsenal of cutting questions, the narrator asks:

Remember that one time you said

I had a funny way of turning your hands into coffins,

How it was my fault you always ended up holding dead things?

Especially when that thing was me?

How great I was at making things disappear?

Especially when that thing was me?

How I would make a great magician?

Well, you get to be my magnum opus!

Here, it seems we have ourselves an individual who has found a way to take her alleged weaknesses and turn them into magic. Dark magic. At first, her weaknesses made her disappear. But now, she has managed to turn them into strengths and uses them to make ol’ coffin-hands vanish.

Did you know that in the 1950s, the U.S considered detonating a nuclear

bomb on the moon just to prove that they could?

reasons to be afraid?

Did you know I walked away from you just to see if I could?

Just to see if you would let me?

Because what is love but a moon ignorant of its captors?

The narrator calls the nuclear bomb an extra hot, fearless heart. Then, she calls love the moon. And she makes a convincing case for both declarations. The detonation of the heart on love’s surface is attempted daily by individuals who want to prove it possible, but Taylor reveals throughout Dirty Mouth. Kiss. that this feat is not without consequences.

If you’re looking to make Taylor Steele a more regular part of your life, follow her on twitter. You can also check out her site to catch up on some of her past work. She’s written for places like Apogee Journal, Rogue Agent, and Blackberry Magazine. Taylor’s also a regular writer at Philadelphia Printworks, Drunken Boat Journal, and The Body is Not an Apology. When it’s not on the page, she’s on the stage so try to catch one of her live spoken word performances sometime.  And of course, if you haven’t already, get your very own copy of Dirty. Mouth. Kiss. right over here. Hurry, quick, get it today! Your ever-vulnerable 2017-heart that’s so full of hope depends on it.