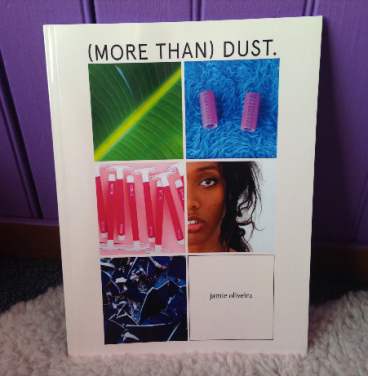 Jamie Oliveira is a traveling visual artist and writer. She is also an activist for women’s healing, which is beautifully apparent in her work. Her latest project, (more than) dust. is a powerful photo book that serves as a platform for sufferers of emotional abuse.

The book came into fruition thanks to funding from a kickstarter campaign, but the idea for the project came to Jamie back in 2013 after the positive response she received for her Tumblr post featuring a photo of herself paired with a list of the many hurtful things an ex had said to her in the throes of a toxic relationship.

(more than) dust. is a book of healing.

It features striking high-resolution photographs of people resplendent with resilience. Opposite each survivor, bright, eye-catching images serve as the backdrop to the stark text that reminds readers of the dangerous effects of verbal abuse. This juxtaposition is not unlike the vulnerable, yet empowering method behind this project. Within these pages, internalized language is released with cathartic vigor.

In the Artist’s Statement at the start of the book, Jamie writes:

(more than) dust. challenges the harmful treatment of cis women, trans women, and nonbinary people through the direct confrontation of statements that have been said to them. These windows of experience mirror the invalidation, minimization, misogyny, and abuse that permeate our interpersonal spaces. The photographs deconstruct the normalization of harmful treatment by fostering a relationship with the context, emotions, and stigmas associated with each statement.

Emotional abuse can be quite isolating because it’s something that, most times, isn’t dealt with publicly – or at all. With this book, Jamie takes the stigma out of this experience that tends to be very private or belittling and brings it out into the open.

Survivors take on the words that have haunted them head-on and create a community of healing in the process.

This project celebrates the fact that we don’t have to stay silent or tolerate any kind of behavior that forces us to internalize negative energy.

One page reads, “You should straighten your hair more, you’d look better.” The bold text is surrounded by navy blue combs against a powder blue background. While this isn’t an outwardly violent statement, backhanded compliments or suggestions about changing one’s physical appearance can lead to harmful thoughts and low self-esteem. If someone you love says things that don’t promote body positivity, it inevitably takes a toll.

Other quotes are less subtle like one that says, “You make me want to kill myself.” In the picture, the text has been set on fire, which is symbolic of the way a line like this can burn into a person’s psyche and do some serious damage. (more than) dust. reveals that there’s very little truth to the old sticks and stones adage. Words can most definitely hurt.

Opposite each survivor, bright, eye-catching images serve as the backdrop to the stark text that reminds readers of the dangerous effects of verbal abuse. This juxtaposition is not unlike the vulnerable, yet empowering method behind this project.

This project celebrates the fact that we don’t have to stay silent or tolerate any kind of behavior that forces us to internalize negative energy. It shows readers the satisfying power they can claim over the words that have kept them quiet.

To keep up with Jamie’s future projects, follow her on twitter here. You can buy (More Than) Dust here and here. Also, learn about Jamie’s past work here.