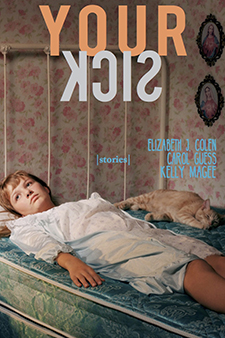 In this collaborative effort, Elizabeth J. Colen (author of poetry and flash fiction collections, finalist for the Lambda Literary Award in 2011), Carol Guess (author of 15 books of poetry/prose, awarded the Philolexian Award for Distinguished Literary Achievement by Columbia University), and Kelly Magee (author of chapbooks and short story collections, winner of the Katherine Anne Porter Prize for Short Fiction) offer a collection of surrealist stories on sickness.

There’s a line from the collection’s titular story that doubles as a description of how these tales affect the reader. “Your sickness swam the skeins of my blood, but I didn’t know. I didn’t know anything,” says the narrator in “Your Sick.” The stories in this collection have a penetrative quality that isn’t fully realized until the reader steps away from them–they’re sneakily internalized and upon finishing them, one finds herself awake in the middle of the night thinking about kids-turned-parrots, the possibility of sprouting a forest from her lungs, and wondering if she’ll ever come to fear the wrath of a Bad Baby.

Despite coming from the imaginative minds of three different writers, the stories in Your Sick coalesce in a way that seems effortless. While each story can stand on its own just fine, there are recurring characters and themes that thread them all together. The collection doesn’t specify the authors of each individual story, which blurs them into a cohesive piece that elicits a new kind of reaction outside of experiencing the stories separately.

One of the most prevalent themes in the collection is the idea of identity being in flux. Many–if not all–of the characters in these stories find themselves questioning their identities as well as reconciling with the new identities their sicknesses create. In “L,” the only story broken up into chapters, we follow a woman who has survived a bus crash and decides to assume the identity of fellow bus passenger Masie, who wasn’t as lucky:

We started walking down Wallingford Avenue, past rows of immaculate bungalows. No one seemed to care that I’d almost died, that I’d stolen a dead girl’s name and apartment. At the bottom of the hill was Gasworks Park. We stood among ruins and looked out at Lake Union. Ely wanted to climb Kite Hill, but I was worried if we stood on the sundial, we might be able to see the scene of the crash. Some part of me didn’t believe it had happened because some part of me felt like I really was Masie, as if this life had been waiting for me all along (Your Sick, 141).

This isn’t the only story that deals with doppelgangers and transformation of identity, but it is the sole story to experiment with identity theft. In “L,” the protagonist quite literally takes another woman’s–Masie’s–identity and attempts to lead her life.

In “The Relocation Program,” the concept of identity is also a factor. Except in this case, rather than stealing a dead person’s identity, the narrator fakes their own death:

The photo meant I had to leave town. Simple as that; it wasn’t even a question. So on casual Friday I faked my own death. Then I went running and beat my best time. Sometimes fake feels better than real. When I was a kid, I smoked candy cigars (Your Sick, 165).

This story plays with the notion that the limits of reality can be futile. An opportune moment arises and the narrator takes advantage of the rare chance to just disappear. Because afterall, “Autumn is the time for faking your own death” (Your Sick, 166).

Your Sick is a an inventive collection that reminds readers of the power of imagination. And while it may tell exhilarating stories about bizarre maladies and consist of general phantasmagoria, at its crux, the collection is about the human condition and is relatable to everyone–even those who only get boring ailments like the common cold.

To stay updated on their latest, you can follow the three authors on their social media platforms of choice. Elizabeth J. Colen can be found on twitter and runs a blog. You can keep up with Carol Guess on her blog. And finally, Kelly Magee has a blog and is also on twitter.